David McGee was born in East York, Ontario, in 1955. He grew up in Victoria, British Columbia, spending his later teen years in Ottawa, Ontario. Possibly due to long drives facing backwards in the family station-wagon, David was one of those boys who could tell you the name and year of every make and model of car.

From a young age, David was also interested in history. He completed a BA in History from Carleton University in Ottawa, then worked as journalist for several small newspapers in Southern Ontario. In 1988 he returned to school to earn a Masters and then a PhD in the History of Technology from the University of Toronto, graduating in 1995.

David’s academic career took him to the Dibner Institute for the History of Science and Technology at the Massachusetts Institute of Technology in 1997, then to the Max Plank Institute for the History of Science in Berlin, then back to the Dibner Institute in 2001. He has published several academic articles about the role of drawings in the design process, and was co-editor of The Book of Michael of Rhodes, A Fifteenth-Century Maritime Manuscript, a long lost Venetian manuscript that contains the first known drawings related to ship design.

In 2008, David returned to Ottawa where he became the first archivist ever hired by the Canada Science and Technology Museum to deal with the museum’s vast archival holdings. He added to those holdings by acquiring nearly 10,000 automobile brochures. It was also at the museum that he first encountered the historical riches of the John de Bondt Collection of Automobile Advertising, and came across an unpublished manuscript that John had written.

David retired from the museum in 2015 to run Lost Ottawa, an online historical community. He has now written several Lost Ottawa books using pictures and comments from members of the community to document life in the nation’s capital in the 20th century.

He remained committed to the idea of publishing John De Bondt’s unpublished manuscript. Given David’s interest in history, technology, drawing, design and automobiles, and a given his respect for the work of John de Bondt he is delighted to finally publish Art, Artists and Automobile Advertising, 1900-1970.

Co-organizers of the conference, originally scheduled to take place in Turin, Italy in April, 2022, have regretfully postponed the conference due to the pandemic situation. They will try to re-schedule for the fall of 2022 or some time in 2023. Watch here for updates.

Planning is under way for the sixth Michael R. Argetsinger Symposium on International Motor Racing History, which is to take place in November, 2022 at Watkins Glen, NY. Watch here for updates. 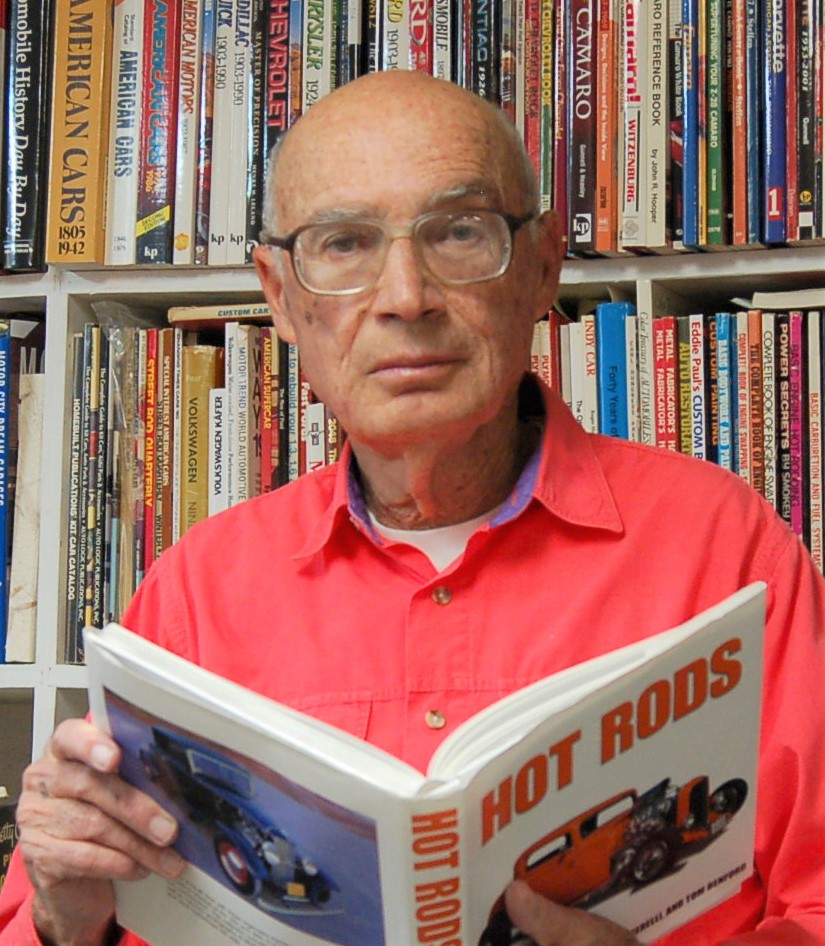 Michael Lamm (0042H) became a member of the Society of Automotive Historians over 50 years ago. As he recently observed, “It’s been a long ride, and that’s one of the advantages of advancing age: “We duffers gain more time to do what we love.”

Mike went on to express that: “In my experience, the great accomplishment of the SAH has been to legitimize automotive history—to make it a serious cultural and academic presence. People—and I’m talking now about everyone from scholars to tinkerers—have come to recognize the automobile and the auto industry as valuable expressions of modern history and human understanding. Automotive history, in my view, now enjoys the same cultural value as architectural history and the history of industrial design.

“My own part in advancing automotive history has been exceedingly modest, and I’m not saying that to simply be self-deprecating. It’s true.

“Then late in 1965 I began freelancing and, over time, wrote something like a thousand articles about cars. What I enjoyed most were the research and writing of historical pieces, and in those days magazines still paid for such articles.

“In 1970, I co-founded (along with Hemmings Motor News) Special-Interest Autos that did its darndest to present the non-elitist facets of automotive history. In SIA, we ran histories of mainstream cars and car companies, but we also tried to uncover the unique, the fascinating, the bizarre, the one-man-engineered oddities and designs that most readers had never seen nor heard of. And we also tried to stress the human, historical side of cars as well as talking about the cars’ hardware and performance capabilities.

“When you write, you sell a service, but when you publish books, you sell products, and frankly it’s easier to sell products than services, so I soon found myself writing and publishing about one book a year. These had to do mostly with the development of General Motors cars: Camaros, Firebirds, Corvettes, Fieros and the Pontiac Solstice. We did one book for Ford about the 2002 Thunderbird.”

And, of course, there was that absolutely standout book co-written with retired GM Director of Design, the late Dave Holls. Its title: A Century of Automotive Style, 100 Years of American Car Design.

Mike served the SAH as President (1976-76), as a Director (1996-1999), and as a Member of the Publications Committee (1996-2009). Mike received the Friend of Automotive History award in 1990 and earned several Cugnot and Benz awards for books and articles with a double Cugnot in 1997 for A Century of Style, one as co-author and the other as publisher. The Society has saluted his long membership and active participation over the decades by designating his membership as Honorary. (11/19/21)

The SAH Book Signing at our Orange Field tent and our Annual Banquet at the Hershey Country Club scheduled for October 6-8 were regretfully cancelled due to pandemic concerns. These decisions were made with the health and safety of all attendees foremost in mind, while recognizing our long term relationships with the AACA, the Hershey Region of the AACA, the Hershey Country Club and the “Hershey Week” experience in general. Our Orange Field presence for 2021 was reduced to one table under a small pagoda tent.

We look forward to resuming our customary big-tent presence at Hershey in October, 2022. See you then !

We have added “Board Documents” to the members area. The new section includes SAH Bylaws, minutes of the Spring and Fall Board Meetings for 2020 and 2021 (more to come), and the beginning of our Polices and Procedures archive.  All are downloadable.  (11/21/21)

The SAH website continues to go through a significant update, which will entail temporary disruptions in the appearance of parts of the website and will temporarily take it off line from time to time. This work is akin to replacing the frame under a moving vehicle. Please pardon our dust and thank you for your patience. (1/5/22)

Take a look at our Improved Awards Section where you can find a description of our different awards and a “how to” about submit a nomination. Click here.  (11/19/21)

The SAH Fall Board of Directors Meeting took place virtually via Zoom on Monday, October 18th, 2021 from 8:00 PM to 9:45 PM EDT. All Officers and Directors were in attendance. The minutes have been posted in the Board Documents section of the Member’s Library. (10/18/21)