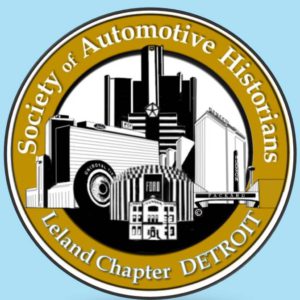 Leland Chapter, Detroit has over 40 active members.  While many of the chapter members are from the automotive industry, all are welcome. Chapter activities focus on the automotive heritage of the Detroit, Flint, Lansing and southeast Michigan areas and often feature local automotive personalities and historic sites.  Engaging students and young enthusiasts is a priority of the chapter mission of researching, recording and presenting automotive history. 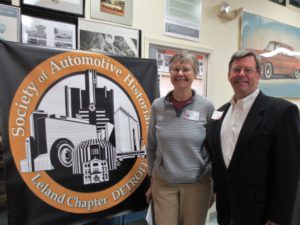 The Chapter is partnering with the Automotive Hall of Fame in Dearborn to assist in updating and revising the Hall’s extensive archive of inductee biographies. The “Bio Project,” as it has come to be known, encompasses 350 of the AHF inductees. This is an ongoing project, administered by Nick Gargaro of the AHF, with guidance from Sarah Cook and Brian Baker of the AHF. This project is an outstanding example of how SAH members in any locale can volunteer to provide valuable assistance to local institutions.  https://www.automotivehalloffame.org/

Kevin Fleck and John Hansen presented a lecture entitled Buying and Restoring Your Own Antique Car on Sunday, February 21, 2021 at the Gilmore Car Museum, as part of the Museum’s Winter Lecture Series.

Gary Witzenburg has an interview with GM designer John Schinella in the October, 2020 issue of Collectible Automobile.  Included are numerous photographs and design illustrations covering Schinella’s 38 year career at GM.  Scroll down to the coverage below of the memorable 12-15-18 Leland Chapter gathering to see John with his GM colleagues.

The Leland Chapter, Detroit end of year gathering and annual meeting will be held Wednesday, December 1, 2021 from 5:30 PM to 8:30 PM, at the Automotive Hall of Fame in Dearborn, Michigan. For the after-meeting program, SAH Director Chris Lezotte will dive deeper into her account of her experiences in advertising, as featured in her article “McCann and Me: One Woman’s Experience in Detroit Automotive Advertising,” as published this year in SAH Automotive History Review #62.

The Leland Chapter, Detroit end of year gathering and annual meeting was held virtually on Tuesday morning, December 22, 2020 at 10:00, hosted by President Brian Baker from the Automotive Hall of Fame in Dearborn, Michigan. Nineteen members and guests were in attendance.

Brian started off with remembrances of four of the Leland members we lost in the past year: Geoffrey Godshall, Mike Davis, John Northup and Dave Langdon. The attendees offered lively recollections of these four Leland stalwarts.

Steve Purdy reviewed the activities of the Automotive Heritage Foundation over the past year and presented the foundation plans for 2021.

Terry Boyce presented a detailed report on the MotorCities National Heritage Area annual meeting and awards ceremony held virtually on November 18th, which he attended with Kevin Kirbitz. Terry highlighted the creation of non-matching mini-grants and a speakers bureau by MotorCities, and their desire to create synergistic relationships with like-minded organizations. Extensive discussion ensued about how the Leland Chapter can collaborate with MotorCities.

Brian introduced Nick Gargaro, a recent College of Wooster (Ohio) graduate who joined the Automotive Hall of Fame staff this past summer. Nick joined the Leland Chapter and the SAH just before the meeting began. One of Nick’s responsibilities at the Hall is to oversee the inductee biography/tribute archive.

Mary Elton presented her Treasurer’s Report, and summarized the results of her very successful 2021 membership promotion, which folded SAH membership and Leland Chapter, Detroit membership together.

Brian Baker closed the virtual gathering with his slide presentation Rearview Mirror, a chronology of his picks for the most beautiful race car designs over the past 100 years.

The Leland Chapter, Detroit fall gathering was held virtually by Zoom on Thursday, October 22, 2020, from the Automotive Hall of Fame (AHF) in Dearborn, Michigan by President Brian Baker.  The event started off with the attendees from two states and one province engaging in a lively discussion about how they were coping with the pandemic by reading, researching, writing, organizing personal libraries, wrenching, etc.

President Baker provided an update on the Bio Project, the Chapter’s work revising and updating the biographies, tribute pages and timelines of inductees at the AHF. This long-term project will further develop the print and digital assets of the AHF with revised and expanded content, which will benefit the public when visiting the Hall. While work on over 60 of the biographies has been completed to date, Sarah Cook, President of the AHF, appealed to Chapter members to continue contributing their knowledge, and their writing skills, emphasizing that many more biographies, tribute pages and timelines are available for revision.

The relationship between the Leland Chapter and the Automotive Hall of Fame has been a significant development for the Chapter this year. As historians born of the 20th century, our members possess an intimate knowledge of automotive events which they can record and share with the generations of the 21st century and beyond.

At the conclusion of the meeting, Brian Baker gave his recent AHF presentation Mobility in the Future: How did we Get Here? This entertaining and informative talk did indeed address the question “How did we get here?” with examples of early attempts at autonomous vehicles and the development of advanced mobility concepts over the past few decades, as they relate to present efforts.

Leland Chapter, Detroit met at the Points and Condenser Society warehouse in Ypsilanti Saturday morning, March 7, at 11:00. Chapter member and SAH Board member Bob Elton presented the video “Hudson Motor Car Company: the Men, the Automobiles and the Company” and took questions afterwards. Lunch was taken at the Sidetrack Bar & Grill. After lunch, Bob conducted a tour of the Ypsilanti Automotive Heritage Museum, for Chapter members and guests.

Oldsmobile by Design:  December 9, 2019 at the R.E. Olds Transportation Museum 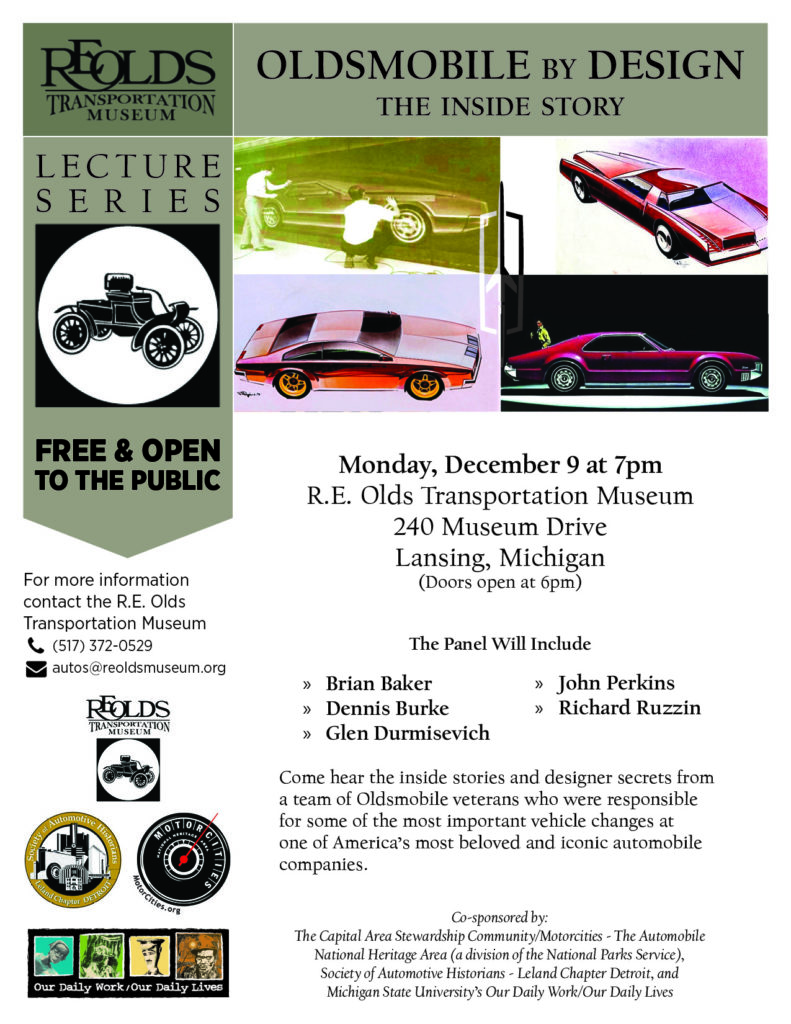 December 7, 2019:  End of the Year Gathering and Annual Meeting at the Automotive Hall of Fame in Dearborn

Leland Chapter, Detroit was treated to an evening with long-time automotive magazine writer Ted West at the M1 Concourse garage in Pontiac, Michigan.  https://m1concourse.com/ Ted regaled attendees with his first-hand memories of the racing scene in the 1960’s and 70’s. As a writer for several magazines, he was assigned to cover the great Can Am endurance races and F1 battles across the world. Ted told the stories behind his racing novel CLOSING SPEED, which was set at the peak of the Porsche 917 and Ferrari battles. His book captures the time and the people during one of the golden ages of auto racing. A fun evening hosted by our friends at M1 Concourse.

A memorabilia swap & exchange took place before and after, with attendees shifting their surplus books and paper memorabilia from one household to another.

April 14, 2019:  Gathering at the Automotive Hall of Fame in Dearborn

Leland Chapter, Detroit members visited the Automotive Hall of Fame (AHF) in Dearborn, MI, on Sunday, April 14th. They were joined by students from the College for Creative Studies and students from the Lawrence Technological University, under the invitation of Leland Chapter President Brian Baker. AHF Director Sarah Cook welcomed the 60 attendees; discussion focused on the functions of the AHF and outreach to younger generations. https://www.automotivehalloffame.org/

After a brief chapter business meeting, President Brian Baker started the afternoon off with a tribute to GM designer and design educator Bill Porter, who was in the audience. Author Jerry Burton then gave a presentation on his 2002  book Zora Arkus-Duntov, the Legend Behind Corvette.  Jerry’s detailed talk was followed by a lively, informative and very entertaining panel discussion and Q&A session by former Corvette designers Jon Albert, John Schinella, Kip Wasenko and Ben Salvadore.

Over 65 enthusiasts were in attendance to witness automotive history, live. For additional coverage of this event, read Pat Bisson’s article on page 7 of SAH Journal #295

June 8, 2018:  Women in Design, a Conversation and Discussion

The EyesOn Design Lecture Series of the Detroit Institute of Ophthalmology and the Leland Chapter, Detroit of the Society of Automotive Historians co-hosted a panel discussion featuring author Constance Smith and designer MaryEllen Green and on Friday, June 8 in the Peacock Room of the Fisher Building in downtown Detroit.

Constance Smith is the author of the recently published book, Damsels in Design, which features MaryEllen among many other women designers of the era.  A graduate of the Pratt Institute in New York, Smith was recruited by GM’s Charles “Chuck” Jordan. Her comprehensive automotive design and engineering experience included work in safety, advanced electronics and airbag implementation. Smith’s 2018 book Damsels in Design may come to be regarded as a benchmark in bringing the history of women in the automotive industry to light. Her book focuses on twenty women who were active in automotive design from 1939 to 1959 and presents their stories, frustrations and accomplishments, as well as their post-automotive design work and personal achievements in the arts. The staggering number of period images Smith collected for this book is a masterful accomplishment in itself.

MaryEllen Green was a member of Harley Earl’s GM Styling group in the early 1950’s. Her father was a successful automobile dealer and distributor, so Green stemmed from automotive roots, which she considered to be a significant advantage in her early career.  At GM she worked on concept cars, show cars and special projects. From GM Green moved to Sunberg-Ferar design, where she was loaned to Dick Teague’s design department at Packard to design the seats and interior panels for the 1955 Packard Caribbean. Green is one of the women featured in Part I of Smith’s book.

The late Margaret “Peggy” Sauer, one of the women featured in Part III of Smith’s book, joined GM Styling in 1955 in the Oldsmobile studio. She later worked in the Cadillac and Buick studios before joining Raymond Loewy’s Avanti Team. Her Oldsmobile concept car credits include the Mona Lisa, the Chantreuse, the Carousel and the Rendezvous. Sauer’s long time close friend, Julie Sabit, and Sabit’s nephew Doug Didia, a former GM Design studio artist from the Detroit area, had several examples of Sauer’s original automotive design artwork on display for the event. Sabit is the custodian of Sauer’s estate and archive.

Crain Communications, Automotive News and Autoweek to the likes of us, generously provided the “Women in Design” banner for this event. The Peacock Room, a Fisher Building retail space period renovation, was kindly made available for the event by shop owner Rachel Lutz.

Congratulations to the Leland Chapter, and to EyesOn Design of the Detroit Institute of Ophthalmology,  in partnering to support this exceptional event.

Twenty Seven enthusiasts were in attendance for a late afternoon/early evening presentation by George Levy on the Can-Am Race Series and on his 2016 book, Can-Am 50th Anniversary, with photos by famed racing photographer Pete Biro.

The  Leland Chapter, Detroit gathered at the Durant-Dort Factory One building in Flint, Michigan on Saturday, June 17, 2017 for a facilities tour and business meeting. Hosted by Factory One Operations Manager Kevin Kirbitz and his staff, over thirty chapter members and their guests were in attendance. Kevin gave the group a tour of the renovated and re-purposed Durant-Dort Factory One building and the renovated Durant-Dort office building across the street, which houses extensive displays of artifacts and photos. Greg Miller, Director of University Archives at Kettering University, gave a tour of the University archives now housed in the second story of the Factory One building. These two buildings were the original facilities of what was later to become General Motors.

Following lunch, organized by Leland Chapter Secretary/Treasurer Victoria Mobley, Kevin Kirbitz gave a presentation on the history of the immediate area and the Durant, Dort and GM presence in Flint. A chapter business meeting followed, with the momentous occasion of long-serving Leland Chapter President John “Top Hat” Jendza III handing over the reins (or, tiller/steering wheel) to his successor Brian Baker. Following the business meeting, retired GM Designer Bill Porter entertained attendees with his reminisces of his career at GM.

A special thanks to Victoria Mobley, Top Hat, Brian Baker, Kevin Kirbitz and Greg Miller for making this event a success.

The Leland Chapter, Detroit is a member of the Historical Society of Michigan (HSM). Many of our members have been keynote speakers at events for the HSM.