If you are an automotive enthusiast who is passionate about learning, researching, recording and reading automotive history, we invite you to join the Society of Automotive Historians.  Our membership spans over 20 countries around the globe. Many automotive authors, past and present, have been or are members.
Autohistory.org reflects our varied interests and has a Members Only section with our digital Membership Roster, searchable pdf’s of all past SAH publications, and high-resolution photographs of vehicles from around the world.

Newly Added Member’s Library Content:  we have added “Board Documents” which includes the SAH Bylaws, minutes of the Spring and Fall Board Meetings for 2020 and 2021 (more to come), and the beginning of our Polices and Procedures archive.  All are downloadable.  (11/21/21)

Review Our Updated and Improved Website Awards Section, providing an explanation of our different awards and how to submit a nomination, by clicking here.  (11/19/21)

The NICOLAS-JOSEPH CUGNOT AWARD, LANGUAGE OTHER THAN ENGLISH is presented to the book, published in 2020,  which represents the most outstanding writing and original research in automotive history:
Dansk Bilproduktion by Erick Karsholt

And the Award of Distinction is presented to a book of particular merit, published in 2020:
Fenaille & Despeaux, L’ancetre d’Esso by Christian Rouxel

The CARL BENZ AWARD, in recognition of excellence in the presentation of automotive history as an article in a periodical during 2020, is presented to:
“The Origin of the Species” by Karl Ludvigsen, published in the June, 2020 issue of The Automobile.

And the Award of Distinction, in recognition of an article of particular merit in a periodical during 2020, is presented to:
“Fuhrmann’s Formidable Four-Cam” by Karl Ludvigsen, published in the January, 2020 issue of Classic Porsche.

The FRIEND OF AUTOMOTIVE HISTORY, which recognizes an individual who over time has made a profound individual contribution to the automotive history community and the historical record, is presented to:
Richard Lentinello

The RICHARD AND GRACE BRIGHAM AWARD, in recognition of the most exemplary editorial, graphic or historical content published in a commercial, institutional or club periodical during 2020, is presented to:
The Automobile

The SAH Fall Board of Directors Meeting took place virtually via Zoom on Monday, October 18th, 2021 from 8:00 PM to 9:45 PM EDT. All Officers and Directors were in attendance. The minutes have been posted in the Board Documents section of the Member’s Library. (10/18/21)

The MEMBER’S LIBRARY includes digital copies of all publications of the Society of Automotive Historians over the past half-century (including indices), over 7,000 high definition images of automobiles from around the globe available to SAH members to use permission free in their publications, unpublished manuscripts, self-publishing advice, and board documents.

The LINKS/RESOURCES page is the most popular part of this website because of the links to a vast array of automotive history resources listed under various category headings.

The AWARDS page lists the various awards bestowed by the SAH, including the $ 500 annual cash prize for the winning student paper.

The CHAPTERS and INTERNATIONAL ORGANIZATIONS  pages link you to the SAH Chapters, and to organizations from around the world similar to the Society of Automotive Historians.

The AUTHORS/BOOKS page provides details of books authored by our members, sorted by marque and other categories.

The Society of Automotive Historians at Hershey

The SAH Book Signing on Thursday, October 7th at our Orange Field tent, and the Annual Banquet at the Hershey Country Club the evening of Friday, October 8, were regretfully cancelled due to lingering pandemic concerns.   These decisions were made with the health and safety of our members, tent visitors and Banquet attendees foremost in mind, while recognizing our valued long term relationships with the AACA, the Hershey Region of the AACA, the Hershey Country Club and the “Hershey Week” experience in general. Our Orange Field presence was reduced this year to one table under a small pagoda tent.  (10/12/21)

Presentation of the 2021 SAH Award Plaques

We look forward to resuming our customary big-tent presence at Hershey in October, 2022. See you then !

The 2020 and 2021 Drive History Conferences both had to be cancelled due to the Covid-19 pandemic, after extensive event planning.

Information on a possible 2022 Conference will be announced, as it becomes available.

Together with the Museo Nazionale dell’Automobile and the AISA, you are invited to the
Third European Automotive History Conference, to be held in the
Mauto, Corso Unità d’Italia 40, Turin, Italy, from April 1 to April 3, 2022.

To further international discourse, conference presentations will focus on subjects which have a cross-border European or International interest, or are of general interest to automotive historians.
The provisional program is as follows:
Friday 1 April: arrival, informal dinner in the hotel.
Saturday 2 April: conference in the museum starting at 9am, with a break for lunch, followed by dinner.
Sunday 3 April: a morning session of further papers, finishing at midday.
Speeches should be made in English, with accompanying Powerpoint presentations. The length of each presentation is provisionally set at 30 minutes., with 10 minutes for questions and discussions.
Please note that the program is subject to change. The organizers reserve the right to cancel any part of the program.

CALL FOR PAPERS:
The closing date for submissions of papers for consideration by the organizers is October 1, 2021, please supply an abstract or outline, including estimated length and number of slides. Please contact:
Anders Ditlev Clausager, 62 Viceroy Close,
Birmingham B5 7UT, England
Telephone +44 (0)121 440 4745   email: sahb.secretary@btinternet.com 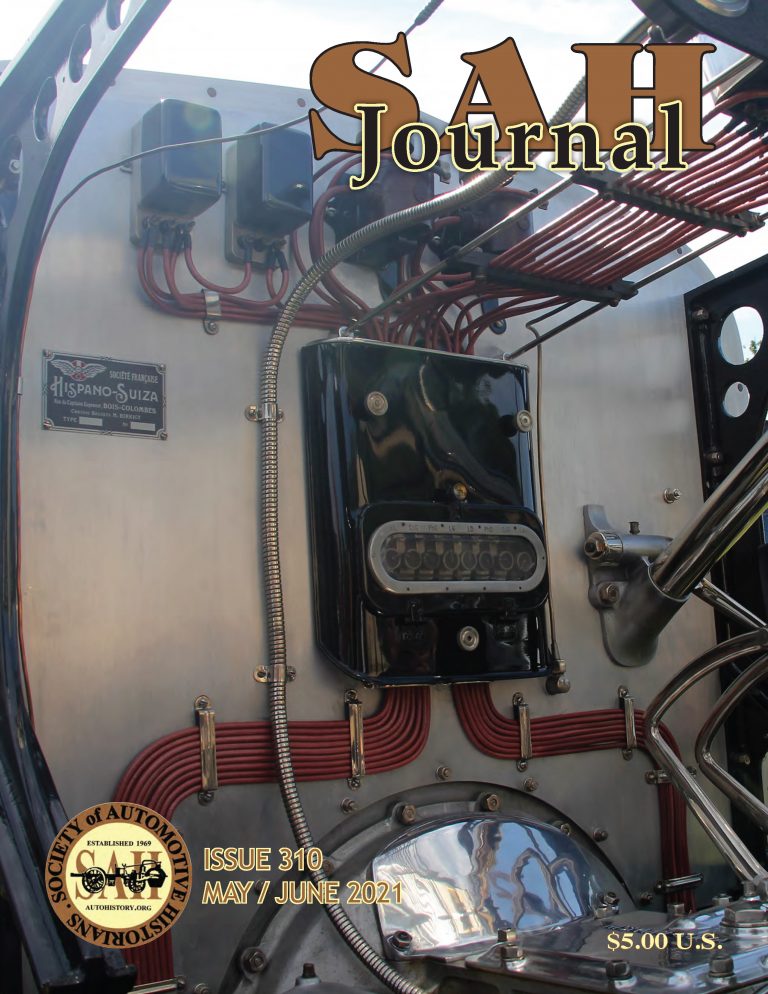 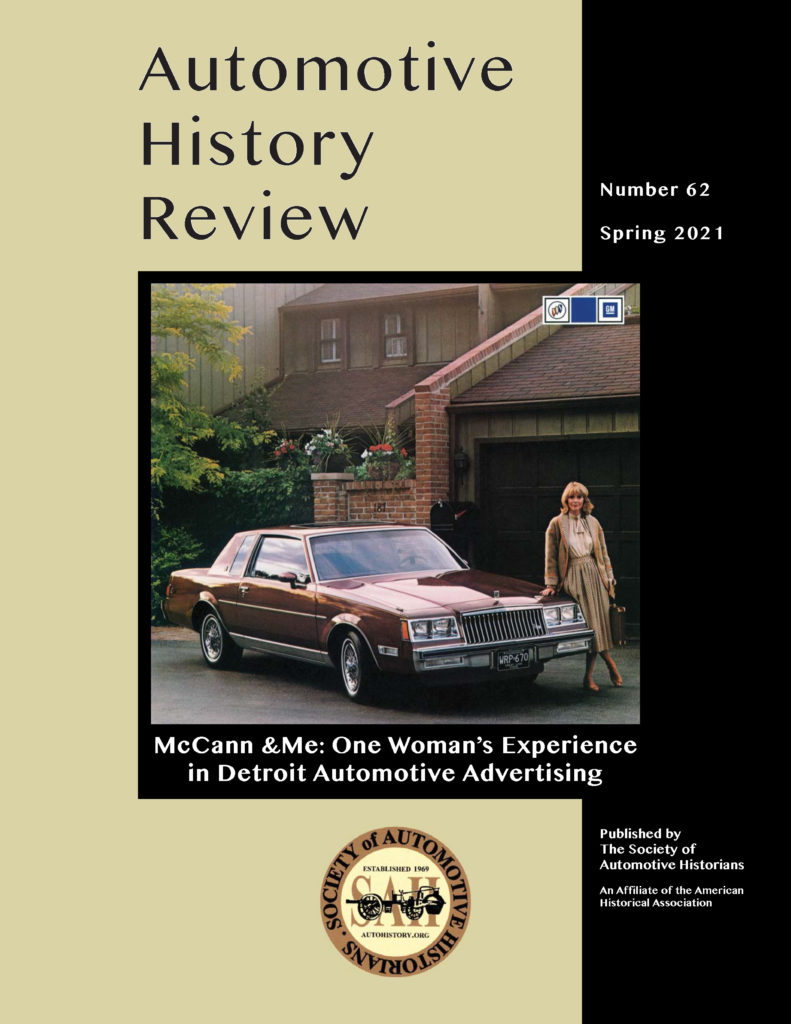 Digital pdf’s of the SAH Journal & the Automotive History Review delivered via email.

All amounts expressed in US funds

ALL OF THE ABOVE ANNUAL SAH MEMBERSHIP LEVELS INCLUDE THESE BENEFITS:

The Third International Drive History Conference was held by the Historic Vehicle Association in Allentown, Pennsylvania, in April, 2019. 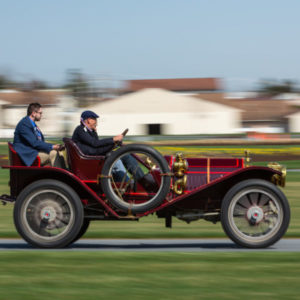 McKeel Hagerty at the wheel of a 1910 Packard Speedster.

For a recap of the Second European Automotive History Conference, held at the Louman Museum at The Hague in March, 2019, click HERE.

1936 Toyota at the Louman Museum; reportedly the oldest Toyota in existence.

Ever wondered what happened to the back issues of Automobile Quarterly after AQ went out of business in 2012?  Well, the SAH has tracked them down and they are available by clicking Here 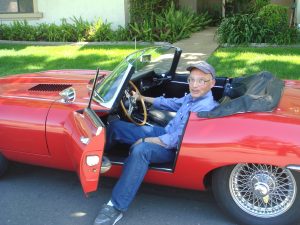 Michael Lamm (0042H) became a member of the Society of Automotive Historians over 50 years ago. As he recently observed, “It’s been a long ride, and that’s one of the advantages of advancing age: “We duffers gain more time to do what we love.”

Mike went on to express that: “In my experience, the great accomplishment of the SAH has been to legitimize automotive history—to make it a serious cultural and academic presence. People—and I’m talking now about everyone from scholars to tinkerers—have come to recognize the automobile and the auto industry as valuable expressions of modern history and human understanding. Automotive history, in my view, now enjoys the same cultural value as architectural history and the history of industrial design.

“My own part in advancing automotive history has been exceedingly modest, and I’m not saying that to simply be self-deprecating. It’s true.

“Then late in 1965 I began freelancing and, over time, wrote something like a thousand articles about cars. What I enjoyed most were the research and writing of historical pieces, and in those days magazines still paid for such articles.

“In 1970, I co-founded (along with Hemmings Motor News) Special-Interest Autos that did its darndest to present the non-elitist facets of automotive history. In SIA, we ran histories of mainstream cars and car companies, but we also tried to uncover the unique, the fascinating, the bizarre, the one-man-engineered oddities and designs that most readers had never seen nor heard of. And we also tried to stress the human, historical side of cars as well as talking about the cars’ hardware and performance capabilities.

“When you write, you sell a service, but when you publish books, you sell products, and frankly it’s easier to sell products than services, so I soon found myself writing and publishing about one book a year. These had to do mostly with the development of General Motors cars: Camaros, Firebirds, Corvettes, Fieros and the Pontiac Solstice. We did one book for Ford about the 2002 Thunderbird.”

And, of course, there was that absolutely standout book co-written with retired GM Director of Design, the late Dave Holls. Its title: A Century of Automotive Style, 100 Years of American Car Design.

Mike served the SAH as President (1976-76), as a Director (1996-1999), and as a Member of the Publications Committee (1996-2009). Mike received the Friend of Automotive History award in 1990 and earned several Cugnot and Benz awards for books and articles with a double Cugnot in 1997 for A Century of Style, one as co-author and the other as publisher. The Society has saluted his long membership and active participation over the decades by designating his membership as Honorary. (11/19/21)